Paul was known before his conversion to Christianity under the name Saul of Tarsus. He was born of Jewish parentage in the city of Tarsus of Cilicia. According to his own testimony, he was a Pharisee and a son of Pharisee, but also a Greek by culture that has received a Greek education. During his scholarship at the School of Hillel in Jerusalem, he demonstrated excessive zealous for his ancestral traditions and persecuted fervently the church of Jesus Christ. In the way to Damascus, he had an encounter with the glorified resurrected Christ that made him convert to Christianity. The account says that “He fell to the earth, and heard a voice saying unto him, Saul, Saul, why persecutes thou me? Acts: 9, 4-5. As a result of this dramatic experience, he proclaimed Christ as Savior in the synagogues of Damascus.

Rejoice in the Lord always.
I will say it again: Rejoice!
Let your gentleness be evident to all. The Lord is near.
Do not be anxious about anything, but in every situation, by prayer and petition, with thanksgiving, present your requests to God. (Philippians 4:4)

His early ministry after his conversion involves three missionary journeys; in his first mission Paul as led by Barnabas went from Antioch to Cyprus, then into southern Asia Minor and finally back to Antioch. His second evangelic mission started in late 49 A.D. from Jerusalem and he sailed the eastern Mediterranean. It is in this period of time that the Christianization of Greece is due. The Greek town of Phillippi on nowadays Northern Greece became the first city in Europe to receive St. Paul’s preaching and where he and Silas were imprisoned. After an earthquake, the gates of the prison were miraculously opened and although Paul and Silas could have escaped they nevertheless remained. This event led to the conversion of the jailor. Acts: 16, 25-40. They continued through the town of Veroia and then to Athens, where Paul preached to the Athenian Synagogue and to the Greek philosophical circles on the Areopagus. From there he continued to Corinth where he spent 18 months between the years 50-52.

Literary sources inform us on the standardization of the pilgrimage routes as traced along the steps of St. Paul already since the Middle Ages. Since St. Paul’s writings, the so-called Paulinian epistles, constitute the earliest texts of the New Testament is understandable the interest of the modern time pilgrims on retracing his missionary journeys. OramaWorld Travel offers a tour along the most captivating pilgrimage route over land in Greece that intelligently balances between pilgrimage and sightseeing. 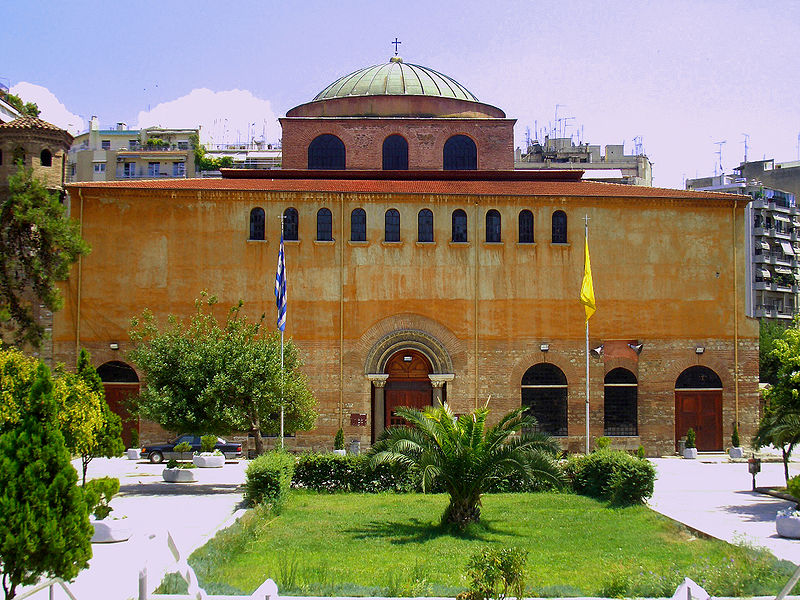 It will follow lunch of traditional Constantinopolitan cuisine within the precincts of the historical market Modiano and then coffee and desert to the only patisserie of the city that prepares traditional Constantinopolitan recipes with buffalo milk. The afternoon tour will take you through the Old City, the so-called “Castles” of Thessaloniki, with stops at two major Byzantine churches: the Church of Osios David and the Monastery of Vlattadon. In the Monastery you will have the opportunity to attend the Vesper.

The morning tour begins with a visit at the archaeological site of Philippi that is comprised of the city walls, the acropolis, the theater, the market place, the Basilicas A and B, the octagonal temple and the prison of St. Paul. We will take a short lunch break in one of the traditional tavernas of the neighboring town of Krenides and we will continue in the afternoon with a visit at the Museum and the ancient theater of Philippi. The town of Krenides corresponds to the urban phase of Philippi in the period of St. Paul (A.D. 1). According to the local tradition the house of Lydia that constituted the first church of Europe was to be found in the quarter of Lydia that extends westwards from Philippi. The podium from where St. Paul preached is located next to the contemporary hotel Lydia.

A full-day tour at St. Paul’s podium and the middle Byzantine core of the historical city that will combine wandering, culinary and cultural expeditions in a journey back to the Byzantine time

In the early afternoon we will take our lunch of Mediterranean cuisine (Elaia Gea) above the so called “balcony” of Veria. The central square of Elias is erected above a naturally raised platform that allows breathtaking views over the valley of Pella. Then, coffee and samali desert, the traditional delicacy made of semolina and honey syrup, at the only 18th secular building that survives in the entire Balkans: the Ottoman han (hostel) in the Old Town. For the rest of the afternoon there is the option of a visit either to the awarded Byzantine museum of the city or to the 20th c. monastery of Soumela Virgin some 30 km. northwards of Veria.

A full-day tour at the spectacular landscape of Meteora, one of Christianity’s holiest places, with byzantine monasteries perched on top of sandstone rock pillars that house priceless artifacts of orthodox art.

The morning tour begins with a visit at the monastery of Rossano, then a second stop at the Monastery of St. Stephan and we will conclude with the monastery of Great Meteor that is dedicated to the Transformation of the Savior.

We will take our lunch in one of the traditional tavernas of Kalambaka, with locally resourced delicacies that include monastic mature cheeses, with a special type of goat cheese, fumigated meats and poultry and naturally, local varieties of exceptional wines. For the vegan palette, the area is reputable for the cultivation of truffle mushrooms that are served as comfiture to many dishes, as exquisite spreads or dried as appetizer. In our afternoon tour we will visit the newly established Museum of natural history and mushroom cultivation of Kalambaka, and the “Pefkis” Byzantine Icons Workshop.

On our way to Athens, and at the foot of Mount Parnassos, within the angle formed by the twin rocks of the Phaedriades, lies the Pan-Hellenic sanctuary of Delphi, which had the most famous oracle of ancient Greece. Delphi was regarded as the centre of the world. After the visit to the archaeological site we will visit the cosmopolitan village of Arachova for lunch and cafe.

In our thematic tour we will discover the layers of Byzantine Athens that are still preserved within the historical core of Plaka. Our tour will start with a visit to the middle Byzantine church of the Virgin Pantanassa on the Monasteraki square (9th c.), then the Virgin of Kapnikarea (11th c.), the little Metropolis (12th c.) which is an open museum for byzantine sculpture, the residence of St. Philothee who is the protector of Athens from 16th c., the Glebe of the Holy Sepulcher which receives the Holy Light from Jerusalem every year (16th c.), the church of St. Nikolaos Ragavas (12th c.), the church of Soter of Kottaki (10th c.), the museum of Greek Folklore art where we can catch glimpses of the material aspects of the Byzantine culture and before our lunch break two final stops at the church of Soter Lykodemou (9th c.) and St. Aikaterini (12th c.).

We will enjoy our lunch by the fringes of Acropolis hill at the Kydathineon square, a vibrant landmark of the post-byzantine Athens. In the afternoon, we will visit the Acropolis and the podium of St. Paul by the Areios Pagos. On the Acropolis focus will be given on the conversion of the temple into the Christian church of the Virgin Atheneiotissa and the first Christian communities in the capital of Greek paganism. Our day we be concluded with an aperitif at the oldest cognac distillery of Athens, the Brettos bar.

The morning tour begins with the Byzantine museum and continues with a visit at the Byzantine and Post-byzantine collections of the Benaki museum. We will have our lunch break at the bistros of the neighboring Kolonaki square, where we will get an upscale taste of Modern Greek cuisine, and we will enjoy our afternoon coffee in the exquisite garden café of the adjacent Numismatic Museum. In the afternoon we will visit the historical monastery of Daphni at the southern suburbs of city, which preserves an impressive mosaic decoration and is regarded as the most important middle-Byzantine monument in Attica.